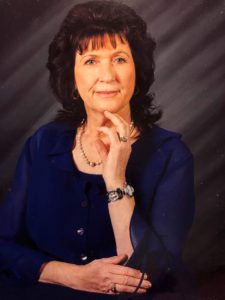 Reverend Ann Baines or “Sister Ann” as she was so affectionately called, was an anointed woman of God
who served the nations and was a spiritual mother to many in the body of Christ.  God’s salvation grace
was applied to her in 1971 and she never looked back.  Recognizing that children are our future, Ann
Baines spent 13 years as a youth pastor and began her training as an evangelist.  She was
commissioned by the Holy Spirit in 1978 to go to the nations.  Her first mission trip was to the Philippines
and Jamaica, and after that she went to over 80 countries.  Reverend Baines’ mission was from His word:
"The gospel of the Kingdom shall be preached in the whole world as a testimony to all nations." -Matthew
24:14
Judith Ann Baines was 72 when she went home to be with her Lord and Savior on Wednesday, August 6,
2014. She was born October 7, 1941 in Nash County to the late Gordon W Dawes, Sr. and Lucy Ann
Joyner Jordan. Along with her parents, she is preceded in death by her husband Johnny Garland Baines,
step-father Herman Jordan, and step-mother Avis Baker Dawes.  Ann leaves to cherish her memory her
son Johnny Ray Baines and wife Cathy; three brothers, Gordon W. Dawes, Jr. and wife Tina of
Savannah, Georgia, Dennis C. Dawes and special friend Linda Mangum of Rocky Mount, Leon Jordan
and wife Vivian of Rocky Mount; two sisters, Connie Dawes Parker and husband DeLeon, Sr. and Debbie
Dawes Nelms and husband Rocky; five grandchildren, Chelsea Baines, Kimi Corey, Lindsey Baines, Kali
Baines, Christa Baines.
Ann was a world missionary and preached and ministered in around 80 countries.  She helped build 48
churches in Africa and a total of 59 churches in Jamaica, Slovakia, Argentina, Russia and Kyrgyzstan.
Ann also built orphanages in Kyrgyzstan and Kenya.
In 1984, God birthed Cross Country World Missions through her. Sister Ann finished her journey on this
earth in August of 2014.  Cross Country World Missions continues her legacy of building churches,
supporting orphanages and supporting the Body of Christ around the world.